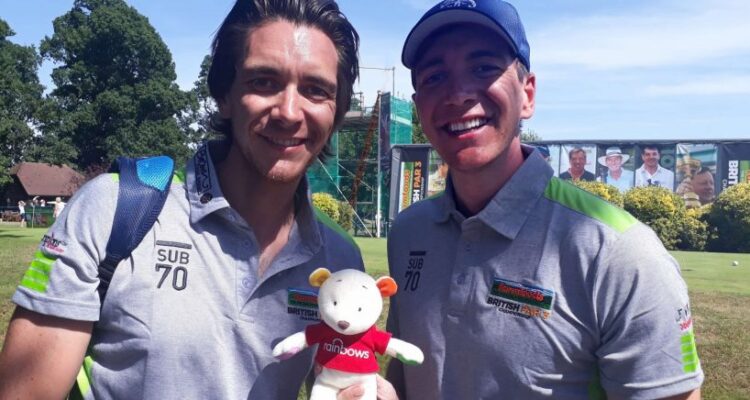 Actors James and Ollie Phelps, 33, who played Fred and George Weasley in the Harry Potter films, developed a passion for golf in between casting spells

My favourite golf course is…

James: Muirfield Village in Ohio. I was lucky enough to play it last summer, and it was out of this world. Everything about it was just right – the attention to detail made it very special. We’ve been lucky to play at some amazing courses all over the world – I’ve so many tags on my golf bag that they jingle like Father Christmas’s sleigh!

Ollie: Pebble Beach. After my honeymoon in California, I managed to sneak away to play both Spyglass Hill and Pebble – which was an amazing experience. I also love Bay Hill. Whenever we do work for the theme park at Universal in Florida, we stay in Orlando and a guy we know is a member there, so we get to play the course. One time we were sitting at breakfast, someone patted me on the shoulder and said ‘I  hope you’re having a great day?’ It was Arnold Palmer.

My best round was at….

James: Royal Melbourne in Australia. I play off 14 and managed to get round in four over – the round of my life. The greens were rolling at 12 or 13 on the stimp!

Ollie: My best round was at Spyglass. I was put out with three of the slowest golfers ever – it took over an hour to play four holes – so I decided to go ahead and play on my own. Playing off the backs, I shot in the 70s which, off 11, I was really chuffed about and still don’t know how it happened.

The course I would most like to play is…

James: Carnoustie. I’d like to recreate the Jean Van de Velde moment on the 18th! Even if I’m nowhere near the brook, I will chip the ball into the water, just so I can go for it.

Ollie: The Old Course at St Andrews, which is on everyone’s bucket list, or Augusta.

My ideal holiday fourball would include…

James: Let’s assume Ollie and I are two of the players, so we can have a pairs match. So I would want a pro because he could tell me what I was doing wrong, so it would be Sergio Garcia.

Ollie: I would have Tiger in my team. He’s not a bad golfer, and I’m sure he’s got some great stories to tell, too!

I always travel with…

My worst holiday experience was…

James: I went to Egypt a few years ago, and everyone in the hotel got sick except me. And we worked it out that I was the only person who had not gone in the pool. So it actually worked out really well, because I got my scuba diving license and spent two weeks going under water.

Ollie: I went to Gran Canaria when I was 19. I went with a girl, who I knew I didn’t want to be with. I’m sure people have had similar experiences and it was not nice for everyone.

My favourite city in the world is…

My top travel tip is…

James: Check the weather forecast at your destination before you travel. I’m always unpreprared for bad weather.

Ollie: Look smart at the check-in desk and try for a last-minute upgrade.