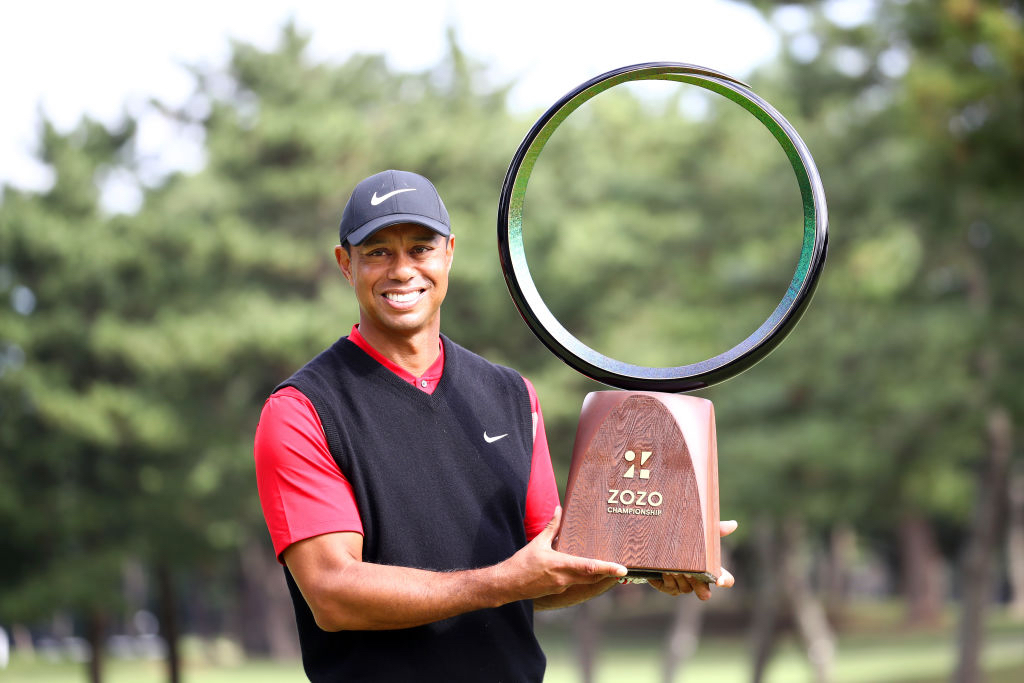 INZAI, JAPAN - OCTOBER 28: Tiger Woods of the United States poses with the trophy after the award ceremony following the final round of the Zozo Championship at Accordia Golf Narashino Country Club on October 28, 2019 in Inzai, Chiba, Japan. (Photo by Chung Sung-Jun/Getty Images)

Woods, making his first PGA Tour start since undergoing knee surgery in August, held a three-shot lead with seven holes remaining when play was suspended due to darkness on Sunday evening.The former world No.1 returned on Monday morning to close out a three-under-par 67 at Narashino Country Club near Tokyo and end the week on 19 under, keeping him ahead of home favourite Hideki Matsuyama.

Victory is Woods’ first since winning the Masters in April, and moves him alongside Sam Snead’s all-time number of PGA Tour titles, with the win also lifting him to sixth in the world rankings.

Woods got off to a slow start when play resumed at 7.30am, finding the bunker with his approach into the par-four 12th and then failing to get up and down to save par. With the lead cut to two, Woods missed an eight-foot birdie attempt at the 13th, but avoided see his advantage reduced further when Matsuyama – playing in the group ahead – missed his birdie from half that distance at the par-five next.

Woods restored his three-stroke cushion with a 15-foot birdie at 14, only for Matsuyama to respond by draining a 30-footer at the par-three 16th.

Matsuyama missed a 15-foot birdie try at 17, and then found a fairway bunker off the final hole on his way to a closing par, with a three-under 67 setting the clubhouse target at 16 under.

Woods safely negotiated his closing stretch in two-putt pars to retain his two-shot cushion heading to the 18th, where he splashed out of a greenside bunker to eight feet and signed off his victory with a birdie.

“This is big,” Woods said. “Hideki put up an amazing fight on his home soil, but to do this in Japan is something I’ll never forget. It’s been an awesome year. But it’s just crazy. Eighty-two wins – it’s a lot.  Sam [Snead] did it into his 50s, I’m in my early 40s still. But in order to win that amount of times, you’re going to have to fail a lot, but I’ve kept giving myself chances. Fortunately, I’ve gone on little hot streaks over the years, and it’s all amassed into a number – 82.”

He added: “I’m playing against kids now that literally started after I won my first Major championship. That’s the cycle of sports – and golf is one of those unique sports that we can do for decades and I’ve been able to do it for a long period of time and hopefully I can continue to do it at this high level.”

A birdie-birdie finish saw Rory McIlroy end the week tied third on 13 under alongside Sungjae Im, while a two-putt birdie at the last lifted Gary Woodland in fifth place ahead of Billy Horschel and Corey Conners.