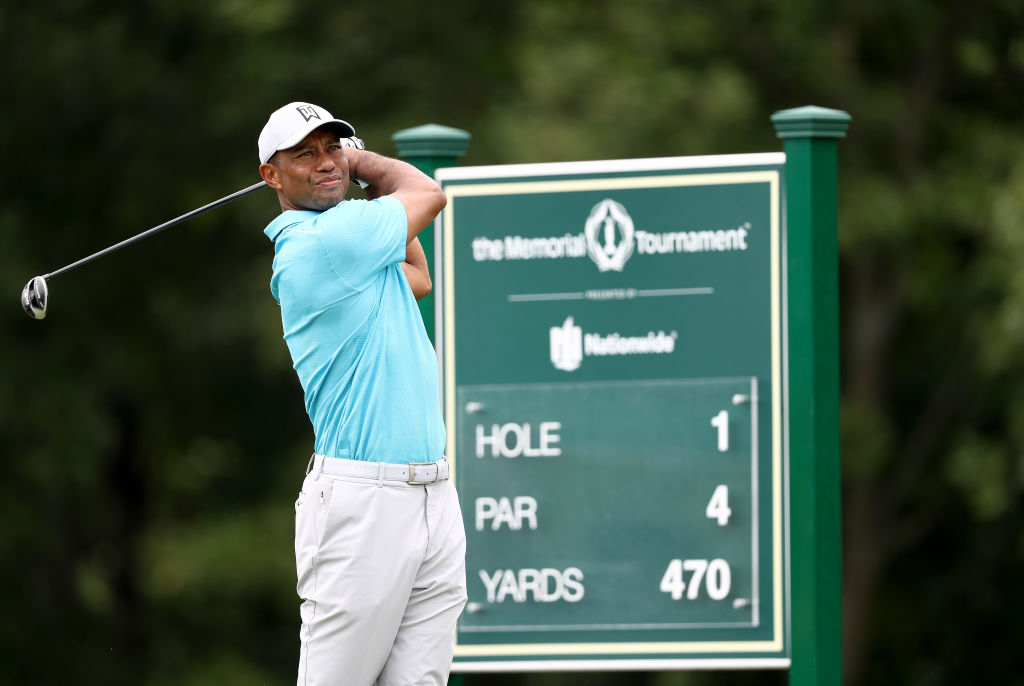 DUBLIN, OHIO - JULY 16: Tiger Woods of the United States plays his shot from the first tee during the first round of The Memorial Tournament on July 16, 2020 at Muirfield Village Golf Club in Dublin, Ohio. (Photo by Jamie Squire/Getty Images)

Tiger Woods lies five shots off the lead at the Memorial Tournament in Ohio after shooting a one-under-par 71 for his first PGA Tour round in five months.

Blustery conditions made scoring difficult, but the Masters champion got off to a fast start to go two under after just three holes, but dropped shots at 6, 8 and 16, sandwiched between gains at 15 and 18, to finish the opening day tied for 18th.

Playing alongside Rory McIlroy, who fired a two-under 70, and Brooks Koepka, who was level par, Woods said he felt happy with his day’s work given the tricky wind and his lack of match practice.
“I would like to have started with easier conditions,” Woods said. “Wind pumping and swirling all over the place. It felt good. I was a little bit rusty, but I felt like overall it was a good start. I was certainly feeling the edginess and nervousness of playing. Getting out there and feeling something I hadn’t felt in a while, it felt good.”

The first round lead is held by Tony Finau, whose six-under 66 featured nine birdies offset by three bogeys. He leads by one from fellow American Ryan Palmer. Spain’s Jon Rahm is three off the pace with a 69.

The other main talking point of the first round was a wind-assisted 423-yard drive by Bryson DeChambeau at the first hole, which left him a 45-yard chip to the green to set up an opening birdie. However, his prodigious driving distances failed to translate into much, with three bogeys and one further birdie seeing him finish the day with a one-over 73 and tied for 42nd.

For all the scores, visit www.pgatour.com