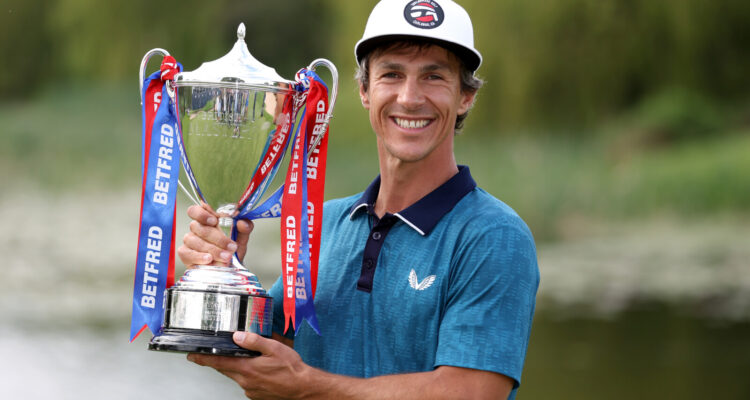 Thorbjørn Olesen finished eagle-birdie for the second day running to win the Betfred British Masters in dramatic fashion at The Belfry.

The 32-year-old posted a one-over-par 73 to finish on ten under, one stroke clear of Sweden’s Sebastian Soderberg.

The Dane entered the final round with a three-stroke lead, but that soon disappeared after a two-over-par front nine, before another pair of bogeys at  14 and 15 left the prospects of a first title for four years unlikely.

However, Olesen holed a 28-foot eagle putt on the par-five 17th to draw level with Soderberg, who had earlier set the clubhouse target at nine under par, before going one better on the 18th as he converted a 35-foot birdie putt in front of a packed grandstand to seal victory and send the 15,000-strong English crowd into raptures.

The victory is the former Ryder Cup player’s sixth on the DP World Tour and first since the 2018 Italian Open, which set him on the path to make his debut for Team Europe later that year.

Scottish duo Richie Ramsay and Connor Syme shared third with South African Justin Walters on eight under par, with 2021 Challenge Tour graduates Chase Hanna and Hurly Long a shot further back in a tie for sixth.

Speaking after the win, Olesen said: “It was obviously a pretty tough day and I hit a lot of shots to the left. I was really struggling, but I somehow I just kept going. Standing on 17, I was thinking that a birdie, birdie finish would maybe get me into a play-off, but to finish eagle, birdie was beyond my wildest expectations. The 18th is a tough hole, where par is a good score, so make a birdie to win was amazing.  It’s a privilege to have won a tournament as big as this. The crowds have been amazing and I got so much support out there. It’s been a long time since I won and I’m delighted to have got back in the winner’s circle after what has been a tough few years.”

Olsen has endured a difficult few years after being accused of sexually assaulting a woman on a flight from the United States in July 2019. The Dane was cleared of all charges by a jury in London last December. The 32-year-old claimed he turned into an ‘automaton’ and was not in control of his body after drinking and taking prescription-only sleeping pills before a flight from Nashville to London, following a tournament in Memphis. His world ranking dropped from 62 in July 2019 to 376 in the week before the British Masters.

Tournament host Danny Willett finished in a tie for 16th on five under, but added four final round birdies to bring his fundraising total to £19,000 after four rounds. Tournament sponsors Betfred pledged to donate £1,000 for every birdie and £2,000 for every eagle the 2016 Masters Champion made this week.