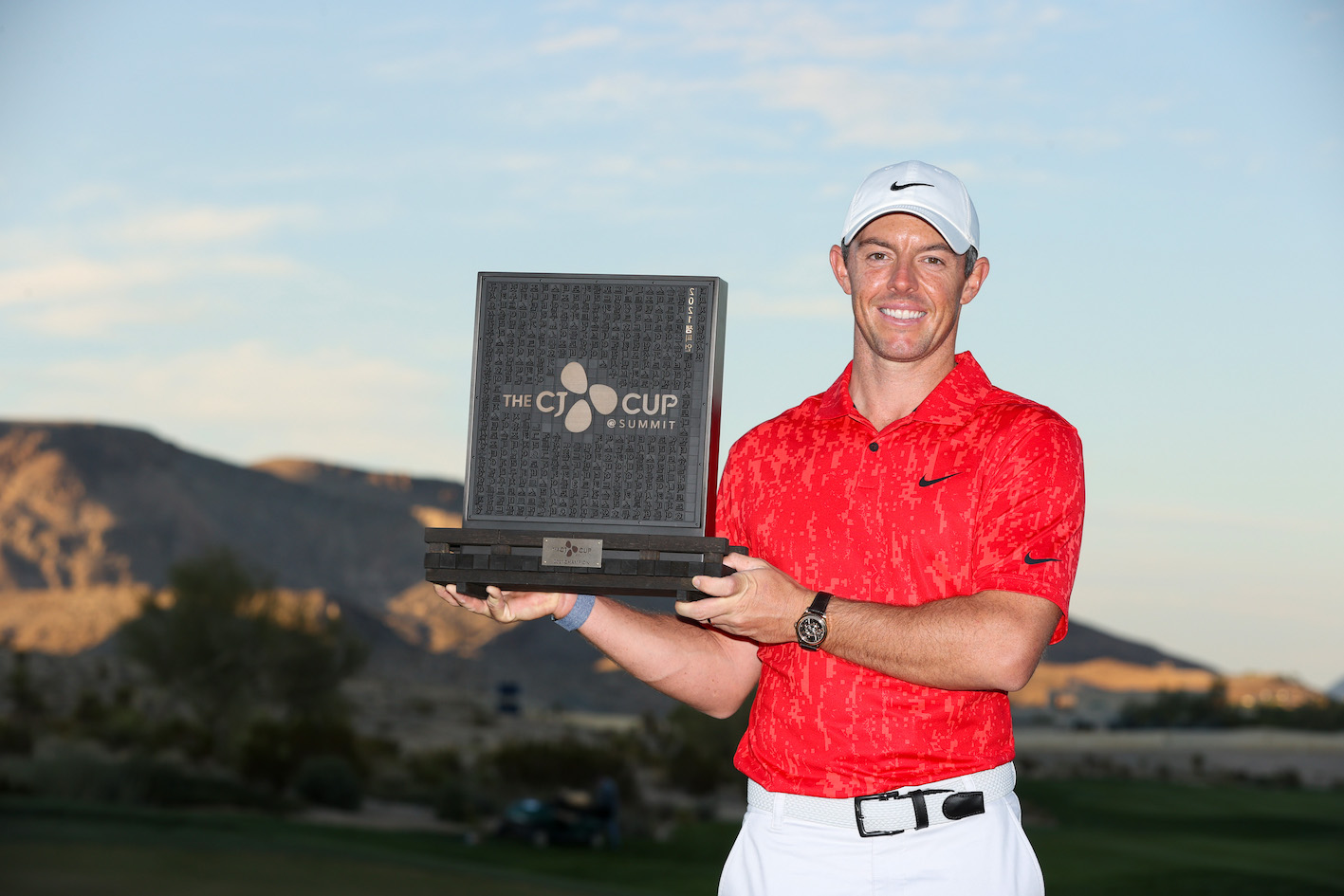 LAS VEGAS, NEVADA - OCTOBER 17: Rory McIlroy of Northern Ireland celebrates with the trophy after winning during the final round of THE CJ CUP @ SUMMIT at The Summit Club on October 17, 2021 in Las Vegas, Nevada. (Photo by Christian Petersen/Getty Images)

Rory McIlroy bounced back from Ryder Cup disappointment as he carded a final-round six-under-par 66 to win the CJ Cup and his 20th PGA Tour title.

The 32-year-old trailed by nine shots after 36 holes at the Summit Club in Las Vegas, but hit a superb 62 on Saturday to storm into contention.

The Northern Irishman began Sunday’s round two behind leader Rickie Fowler, but shot a three-under 33 on his front nine to stay in the hunt, but after a birdie at the par-four 12th, he sunk a 34-foot putt from off the front of the green to eagle the par-five 14th and move three clear.  And with Fowler struggling to replicate his 63 on Saturday during his 71, Collin Morikawa emerged as McIlroy’s closest challenger.

The two-time major winner picked up birdies on eight of his first 11 holes and closed with an eagle to move to within one after his lowest-ever PGA Tour round of 62. However, McIlroy parred his last four holes to secure a memorable one-shot win.

Despite winning the Wells Fargo Championship in May, McIlroy has struggled for most of 2021, which included losing his opening three matches at the Ryder Cup as Europe went down to a record 19-9 defeat. But playing for the first time since Europe’s crushing defeat by the United States at Whistling Straits, McIlroy issued a thrilling reminder of the immense talent that has helped lift him to four major titles.

“It was huge, it really was,” McIlroy said when asked if his poor Ryder Cup performance fuelled his motivation to win again. “There was a lot of reflection in the couple of weeks since then. This is what I need to do. I need to play golf, simplify it and just be me. I think for the last few months I was trying to be someone else to try to get better but realised that being me is enough and being me, I can do things like this.”

Victory moved McIlroy back into the world’s top ten for the first time since May, rising to eighth from last week’s 14th. His 20th PGA Tour success also guarantees him lifetime membership of the PGA Tour, which will kick in when he completes his 15th season on the tour in 2023-24.

For the final leaderboard from the CJ Cup, click here.