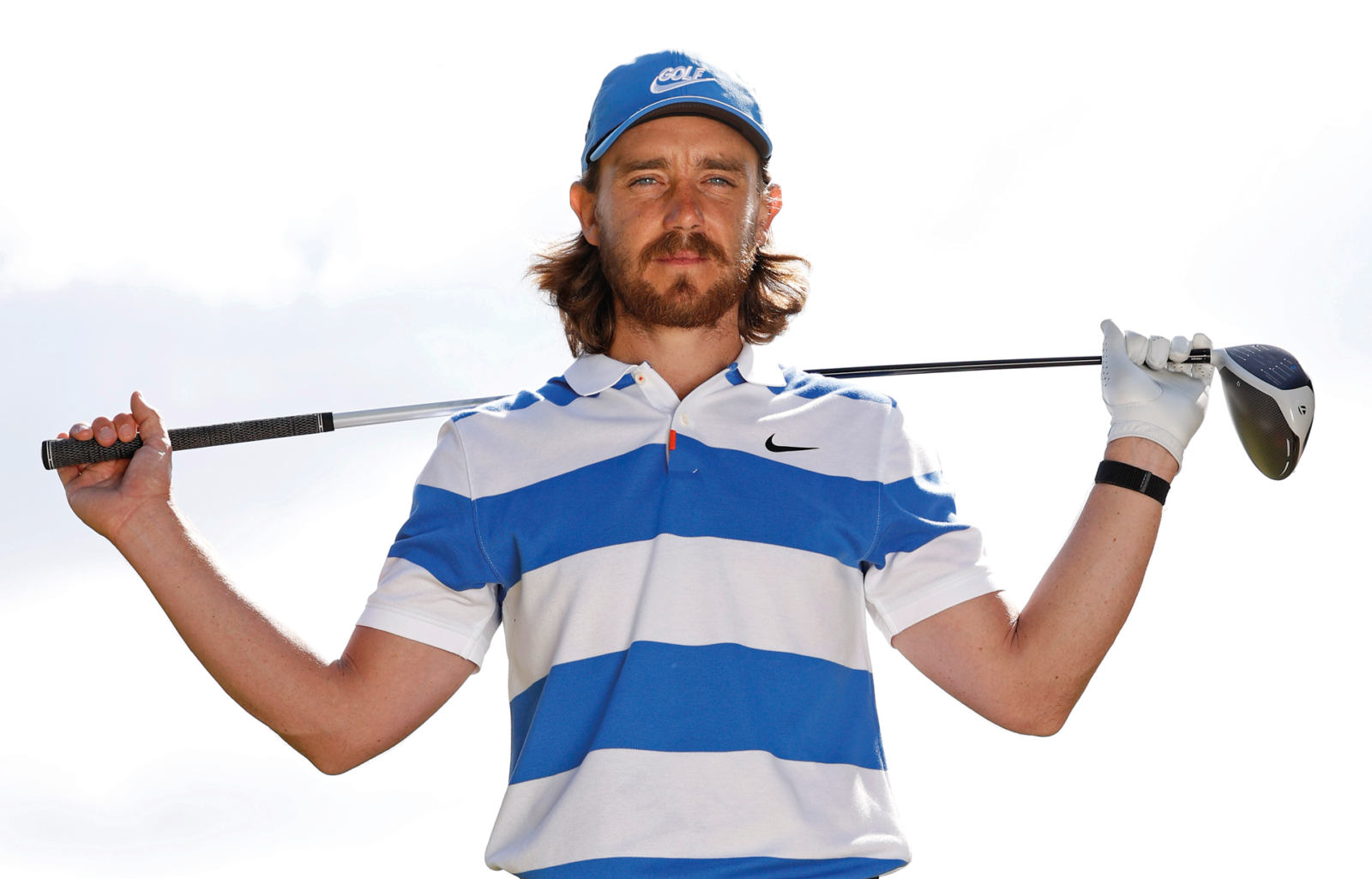 After making his professional debut in 2010, Tommy Fleetwood has been a permanent fixture in the world’s top events over the last decade. Still only 30, the proud Lancastrian is confident that he has the game and the mentality to add to his winning tally and bag that elusive major title

How would you some up your performances in 2021 and where you are in the game right now?

It’s been a tough year, no question. Your game ebbs and flows and you find form and you lose form. I think the standard of golf on tour at the moment is a joke – in a good way. I remember shooting five-under during the BMW PGA Championship at Wentworth this year and moved up just two places on what was a hard golf course. I think when you aren’t playing well, it’s just getting highlighted more – courses are tough, the margins for error are getting smaller, and it’s hard to get momentum when it’s like that.

I’m happy that I started to play well again towards the end of the season, but the honest answer is that I simply haven’t managed to string four good rounds together in the same week. I was almost there at the Italian Open in September, where I put in three-and-a-half decent rounds and finished second, and I had a couple of top-10 finishes last month, but you’ve got to do it over 72 holes to stand any chance of winning or being in contention these days. Being up there and hitting shots under pressure was great, but I just need to be up there more often.

At the end of the day, for what’s been a bit of a struggle of a year, I played well in The Open, I played in the Olympics, and I earned an automatic place in the Ryder Cup team, so it wasn’t all bad. Having said that, my world ranking has slipped this year and I need to get that back up to ensure I’m in all the big events next season.

It was obviously disappointing to be on the receiving end of such a heavy defeat in the Ryder Cup, but from a personal viewpoint was it frustrating not to be involved in more matches?

Of course I would have loved to have played in every match, but I also I felt like I could do a good job in the fourballs. I thought the pairings that Padraig put out in all formats were great. We had 12 amazing players. We had good strength in depth, so it was not surprising that Padraig didn’t ask me to play five matches.

I would have loved to have done better in the fourballs, and I think the foursomes pairings that went out were right, and they were really good. We weren’t that far away in each match, but, as you say, we ended up on the receiving end of a heavy defeat. It seemed like all the crucial moments went against us. They holed a lot more putts than we did and that made the difference.

We really didn’t perform as badly as a team as the final score suggests, but still getting thumped really hurt us and it brought us very close together, and I think motivated us all to hopefully come back in two years’ time and win it back in Rome.

Given the strength in depth of the young Americans currently on tour, there has been some talk about how the US college system is creating a stronger pathway into professional golf than the route that many European players are experiencing coming through the amateur ranks. Was going over to the US college system ever an option for you or something you looked at?

I obviously thought about it, because you get to that age where you do think about it, but at the same time, I enjoyed my time playing amateur golf for England and got to travel alot and experience lots of different places. When I turned pro, I was in a situation where I needed to start earning money for my family, so I turned pro at 19 and that was it. I was on my way.

But I’m really interested in the US college system. I think it produces a lot of amazing players and it is clearly a successful system. I think England Golf, or the English Golf Union, as it was when I was an amateur, have put together a fantastic system, and we produce good players as well.

Both are good options, and both put you in a strong, competitive environment, and it’s what you then do with that information, and what you take from it, that move you forward, really. There are always going to be talented players either side who come through, but right now the US system is certainly producing some very talented young players. But like everything, it goes in cycles.

Did you miss playing in front of crowds when Covid restrictions didn’t allow fans in? Are you the type of personality that needs to feed off the energy of the galleries?

No, I don’t think so. I wouldn’t say I’m a show-off in any way, but I think what I do is I love the game, and I love trying to get better, and I want to get the most out of myself. If the crowds are there or not, I’m still trying to do the same things.

I do agree that there are definitely certain times, certain moments, where crowds bring the best out in sportsmen and women, but there are probably some that benefit from there being no crowds, as well.

In particular, if you look at a major championship and the added element of you’re not just controlling your emotions, you’re controlling what’s happening with the crowd and their energy, as well, listening to cheers going on, whether it’s you or whether it’s somebody else, listening to groans. There’s a lot of added elements, so it does bring a different skill set when there are thousands of people watching.

Personally, the only one I like to be in control of my game is me. So, whether there’s one person watching, no people, or 60,000, I’m just trying to be as good as I can possibly be, and that will always stay the same until I stop playing.

You finished second behind Shane Lowry in The Open at Portrush in 2019. Does that seem like a lifetime ago now, and what did you learn from that week? Did you see it as a failure not to come away with the jug?
I didn’t see it as failure, but I was certainly very disappointed. I think using the word ‘failure’ can sometimes sound a bit harsh. Finishing runner-up at the Open equalled my best-ever finish in a major. It also depends on how you finish second, as well. It wasn’t like I was three shots clear and threw it away. Elite sport is all about small margins, and you win some and you lose some. I guess it’s how you bounce back from those disappointments that counts.

Judging by some of your best performances, are you at your most comfortable on a links layout?

Yes, links golf is something I feel very comfortable with. I grew up in a links town, and although I wasn’t like a member of one of the links courses, I’ve played on it a lot. When I’m at home I will go and play Hillside quite a bit with my dad, things like that, so links golf is more part of whom I am as a golfer that a lot of other players. It takes a different kind of preparation, but as soon as I’m a links course I feel pretty comfortable with what is needed.

The Open returns to Hoylake in 2023. Could that be a good opportunity to become the first English winner of an Open on English soil since Tony Jacklin’s victory at Lytham in 1969?

Yeah, I think it’s just an amazing opportunity. The Open at Hoylake is very special. I’ve said it many times. For me personally there’s three Opens: there’s Birkdale, there’s Hoylake, there’s Royal Lytham. They’re all within 30-40 minutes of where I grew up. People go their whole lives without playing any kind of event that close to home, and there’s three chances there of the biggest event in the world being that close for me.

It’s very special for me, and I completely see it as opportunity. It’s nerve-racking, yeah. It’s like a different element to the event, but I love it, I really do. I consider myself very lucky that I get to play this tournament as one of the home favourites and to get the support that I do, and I always look forward to it.

You’ve won all over the world, but you haven’t won on the PGA Tour yet. Is that something you’re keen to tick off the bucket list?

Yeah, thanks for reminding me! I think any European player would be lying if they said winning in America wasn’t the next step for them in their career, and I’m no different. I haven’t done it. In the grand scheme of things, winning in America is something that I need to do.

I’ve had chances and sometimes somebody’s played better than me, and there’s been times when I’ve hit the wrong shot at the wrong time. It is what it is, but I think at the present moment I am pretty happy with where my game is trending and I like the work that I’m doing, so hopefully things will fall into place and I’ll get over that hurdle one day.