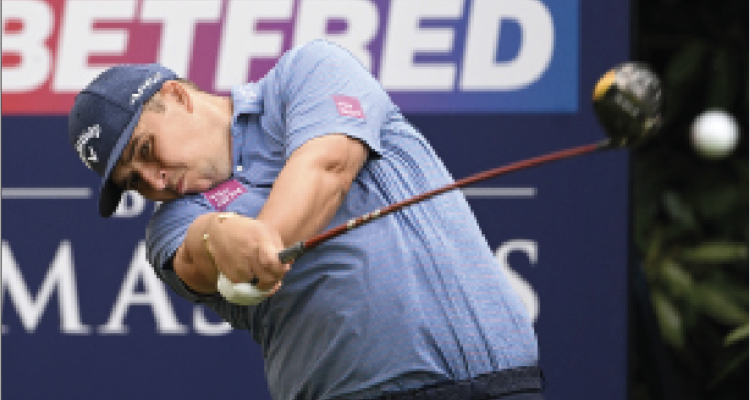 After winning his first European Tour event, breaking a world record, and making a big impression at last year’s US Open, Yorkshire’s Marcus Armitage is ready to take on all challenges that the game has to throw at him

During the spring of last year, as the UK emerged from the final of its three national lockdowns, there can’t have been many golf fans with an internet connection that didn’t tune in to YouTube at some point to see a professional golfer trying to hit a golf ball into an open-top sports car travelling at 80mph down the runway at Elvington Airfield in Yorkshire.

Filmed as part of the European Tour’s on-going series of stunts and wind-ups designed to drive up digital clicks and hits, the world record for ‘the longest drive ever hit into a moving car’ was eventually achieved when Marcus Armitage’s 303-yard effort with a Callaway Epic driver rattled into the back of a BMW M8 Convertible driven by touring car champion Paul O’Neill.

It beat the previous record by 30 yards, which was some achievement in itself, but the star of the show was definitely Armitage, whose child-like enthusiasm for the task, and the sheer joie de vivre that he showed once he had chalked up the record – which initially involved him taking off his shirt and running bare-chested down the runway – made him an instant internet sensation, with over 115,000 views in just a few days after it aired in mid-April.

The European Tour’s media team definitely found the right man for the job in Armitage, as the 34-year-old from Huddersfield is a natural born entertainer, as well as being a pretty handy golfer.

Just two months after entering the Guinness Book of World Records, Armitage, who goes by the nickname of ‘Bullet’ on tour – it’s a long story – added another important addition to his CV when he recorded the first European Tour win of his career at the 2021 Porsche European Open in Germany. It was a well-deserved and very welcome reward for a man who has progressed through golf’s ranks the hard way after a very tough start to his life.

While most 13-year-olds are breezing through life without much of a care in the world, Armitage was dealing with the death of his mother, Jean, from cancer. For any child to lose a parent at such a young age is devastating, but it hit young Marcus hard, and he lost all interest in school and learning.

Already a decent golfer, with a handicap of 10, Marcus turned his attentions to the driving range and the golf course, where he passed the hours that he should have been spent studying textbooks, mastering the arts of driving, chipping and putting at Oldham Golf Club instead. Golf proved an all-consuming distraction from the sadness he felt from the loss of his mother. It became his sanctuary and a safe space where he, and he alone, was in control of his destiny.

Looking back on those days, Marcus says: “After mum died, I left school because I couldn’t focus in the classroom. The only place I could focus was on the golf course, hitting shots and trying to get better. It took my mind off what had happened with my mum. Golf just became my answer. I mean, I know there are no answers in life, but it was my answer at the time. Everything was golf.’’

As his game progressed and his handicap came down, Armitage joined Howley Hall Golf Club and soon started winning on the local circuit. For Armitage there was no smooth transition from the amateur ranks to Europe’s top tour with a few months of sponsors’ invitation, as is often the case for the game’s elite amateurs. He had to carve out a different path and after turning professional in 2012, he joined the EuroPro Tour, the third tier of professional golf in Europe. He proved an instant success on the UK-based circuit, winning three times during the 2013 season en route to being named rookie of the year and earning promotion to the Challenge Tour.

After three relatively successful seasons on the second-tier tour, a victory in the Foshan Open in China in 2016 helped to earn his European Tour card through the end-of-year rankings for the 2017 season. The big time beckoned. But, like many before him, Armitage found the step up to the top tier a tough one, and he dropped straight back down to the Challenge Tour after finishing 152nd in the 2017 Race to Dubai ranking.

Playing the tour when you’re not making cuts is an expensive business and Armitage soon found himself £100,000 in debt and running out of funds to pay for flights and entry fees. After winning his European Tour card back through qualifying school at the end of 2019, Armitage was facing the prospect of preparing for the 2020 season without the funds to pay for flights or hotels and the future looked bleak. Help, thankfully, came in the shape of fellow European Tour player Robert Rock, who leant him £5,000 to cover his expenses for the first few tournaments of the year and enable him to continue to follow his dream.

Rock’s faith was soon repaid – along with the debt – when Armitage finished third in the South African Open in early January, enabling him to get back on his feet both financially and professionally. The rest of the season yielded five top-10s and a further €260,000 in prize money after he made 18 cuts from 23 tournaments, and his career was back on something resembling the right track.

With his financial worries well and truly behind him, Armitage gently moved up a gear in 2021, making 19 of 25 cuts, bagging six top-20 finishes and securing his long-dreamed of first win at the aforementioned European Open in June, where a closing 65 in the rain-shortened 54-hole tournament was good enough for a two-shot win and a €180,000 winner’s cheque.

The emotion of it all came to a head at the trophy presentation in Germany when a tearful Armitage opened up about the thoughts that were going through his mind as he lifted the trophy, including the debt he owed to his mother. Speaking through the tears, he said: “Twenty years ago I lost my mum and I’ve dreamt about this [winning on the European Tour] since that day. You have days where you think it might not ever happen, but I just stuck at it. Today is a great day, and I’m sure she would be proud, and everybody in my team that’s helped me – but this one’s for me. For all of those lonely days I spent working on my dream. While I’m grateful to my team, I think I’ve got to take a lot of credit for it myself.”

Those humbling words touched a chord with many who were there on the day and those that watched on television. The European Open win led to a significant rise up the rankings for the Yorkshireman and qualification for his first major championship on US soil, the US Open at Torrey Pines, and then later that summer a second stab at the 149th Open Championship at Royal St George’s, having made his debut at the 2018 renewal at Carnoustie, where a dislocated shoulder caused by an indoor sky-diving accident put paid to his chances of doing himself justice.

Armitage’s doctor had advised him not to play at Carnoustie, but having waited all of his life to be given a chance to play, he was damned if playing with one working arm was going to stop him from taking part. He duly bunted his way around to an opening 80. The next day he managed 11 strokes better, a respectable 69, courtesy of a red hot of a putter. He missed the cut, of course, but he had had his first taste of the Open and was eager for more.

He had to wait four more years for that opportunity to come around again. Opening rounds of 69 and 72 at St George’s saw him advance to his first Open weekend, while a pair of even-par 70s on Saturday and Sunday kept him at one over for the championship, well back from winner Collin Morikawa, but with an experience he won’t soon forget in a hurry.

“It was magic,” he says, recalling his week on the famous Kent links. “Major golf is everything that I’d imagined as a kid, and even more so at the weekend. I’m a fast learner, but it has taken me a bit of time to feel comfortable in these bigger events. Some people take to it straightaway, like your Rorys, but it’s taken me a bit longer. I’m slowly getting the gist of it, and hopefully I can break through next year with something bigger.”

For now, Armitage is happy being one of the underdogs, and flying under the radar, but it might not be for much longer.