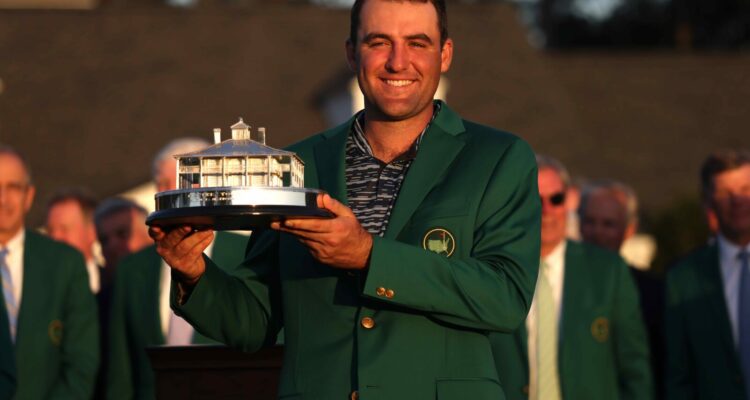 Scottie Scheffler confirmed his position as the world’s top male golfer by putting on a dominant display over four days at Augusta to win The Masters by three shots.

The 25-year-old American fired a closing 71, missing two short putts for a double bogey on 18, to finish 10 under par and claim the coveted green jacket.

The 25-year-old American finished three shots clear of Rory McIlroy, who shot an eight-under-par 64 to race up the leaderboard on Sunday. Sadly it was all too little too late for the Northern Irishman, and even a holed bunker shot on the last won’t detract from his disappointment as not being better placed after three rounds.

Australia’s Cameron Smith, playing in the last pair with Scheffler, hit a final round 73 to finish tied third on five under alongside Shane Lowry.

Scheffler held a three-shot overnight lead and continued his recent dominance with another commanding performance in Sunday’s final round.  The highlight was a stunning chip-in birdie on the third, which turned the momentum back in his favour after Smith had reduced the gap to just one shot with birdies at the first two holes.

Smith, also bidding for a first major title, kept the pressure up over the next half-a-dozen holes, firing a birdie at the 7th and another at the difficult 11th to close the gap to three. However, the Players Championship winner saw his chance at major glory sink like a stone with a triple bogey on the par-three 12th, where a skewed tee shot found the water, and his approach with his second ball flew the green.

Scheffler added birdies at 14 and 15 to stretch his lead to five shots with three holes left to play, and with pars and 16 and 17, he headed to the final hole with a sizeable cushion. An understandably nervy four-putt finish dented the margin of his victory, but no-one was left in any doubt that Scheffler was a deserving winner in a week where he fired 21 birdies.

“I tried to keep my head down and execute shots. I knew if I took care of my stuff and played solid stuff, I’d get the job done,” said Scheffler, who has now won four of his last six tournaments.  “I’m kind of glad I missed those putts at the end because it meant I didn’t get too emotional.”

For the full scores from the 85th Masters, click here.