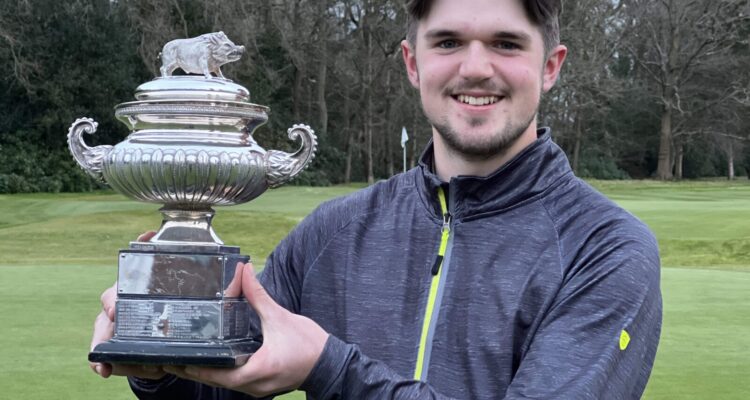 Hertfordshire’s Max Hopkins etched his name on the prestigious Hampshire Hog trophy with a one-stroke victory at North Hants Golf Club on Sunday.

The 19 year old from Bishops Stortford GC shot rounds of 68 and 69 for a three-under-par winning score of 137, and finish ahead of Joe Harvey (The Kendleshire) and Freddie Macarther (Ullesthorpe Court).

A series of impressive wedge shots and tidy approach play throughout a glorious spring day at the Fleet venue took Hopkins clear of the field – with all but one of eight birdies coming from simple tap-ins – and despite two late dropped shots, Hopkins could not be caught.

“It’s good to know I am on the same route as those players you see on the board who have gone on to make it on the biggest stage,” said Hopkins. “It’s nice to add my name to that list.”

Having won the Daily Telegraph Junior Masters in 2017, and represented England Boys in the European Team Championships and Home Internationals – winning the latter event, Hopkins’ progress stalled over the last two years during the covid pandemic. So Sunday’s victory is a timely boost for his career as he chases a dream of competing on the professional circuit with his older brother Jon, also a +4 handicapper, who is currently playing college golf in the US.

“There have not been many brothers competing at the top level, so that would be pretty cool,” said Hopkins, who is coached by former European Tour player Simon Khan.

The Hampshire Salver, awarded for the best combined score over 72 holes with two rounds at Blackmoor Golf Club for the Selborne Salver and then the two rounds at the Hampshire Hog, went to England International Jack Brooks. The 31-year-old from The Mere in Bolton followed rounds of 67 and 71 at Blackmoor with 72 and 67 at North Hants for a winning total of 277. Brooks is targeting a place in the US Mid Amateur in September, and his win on Sunday marks a solid step towards that goal.