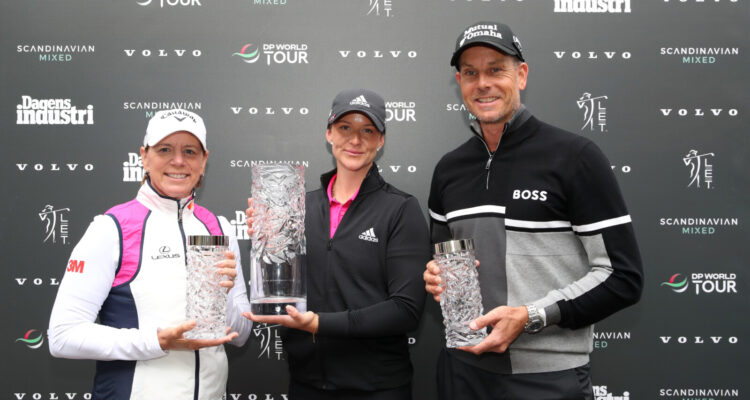 12 June 2022
Sweden’s Linn Grant made history in front of her home fans as she stormed to a stunning nine-shot victory at the Volvo Car Scandinavian Mixed to become the first female winner of a DP World Tour event.
The 22-year-old Swede produced a nerveless display of frontrunning on Sunday to keep a host of DP World Tour stars at bay and claim her third Ladies European Tour title in just six starts this season.
Grant did not put a foot wrong at Halmstad Golf Club on day four, stretching her overnight lead from two shots to seven with five birdies in the first six holes.

She managed to keep her card clean with three successive pars as the rain poured down over the next few holes before making another birdie on the tenth.

Spurred on by the crowd, Grant picked up further shots at the 11th and 14th to sign for a flawless 64, topping the leaderboard at 24 under par to win by the biggest margin on the DP World Tour so far this season.

Tournament co-host Henrik Stenson finished in a tie for second on 15 under alongside Scotland’s Marc Warren, with back-to-back birdies at the 17th and 18th helping Stenson to a closing 70.

Speaking after her historic win, Grant, whose grandfather was a Scottish golf professional who emigrated to Sweden, said: “I’m so happy that I’m playing at home. just to see all my family here and everyone that I care about is watching, so it’s really nice. I was actually surprisingly calm on the first tee. My first day with Annika was my most scary and stressful one, so today I was very calm and relaxed.”

She added: “I hope this victory brings more attention to women’s golf and it gets people’s eyes on us a little bit more. It is always nice to say that you beat the guys! All week I just felt like it’s the girls against the guys and whoever picks up that trophy represents the field.”

Runner-up and tournament host Henrik Stenson added: “There was just one player out there today and she played amazing. Every time I looked back Linn was in prime position and just gave herself birdie chance after birdie chance, so there wasn’t much I could do against a player like that, so very well played and congratulations to Linn.