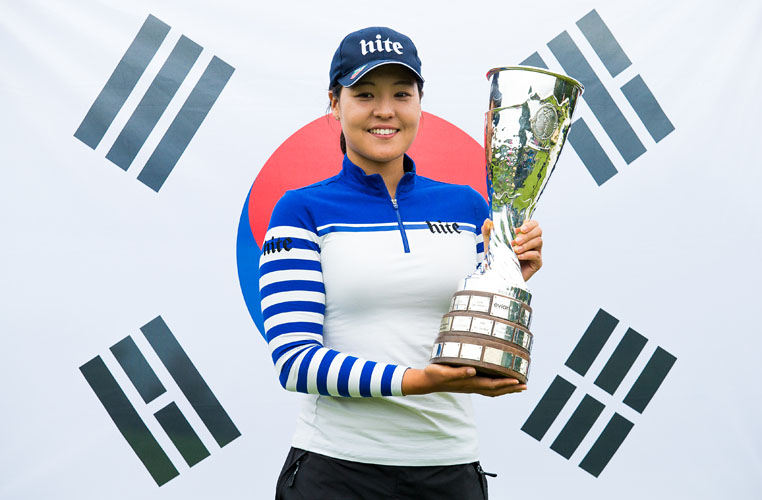 Chun bettered the previous record of 20 under par set by Jason Day at the 2015 PGA Championship at Whistling Straits, a score which was matched by Henrik Stenson in The Open at Royal Troon earlier this year.

With a four stroke victory over fellow South Koreans Ryu So Yeon and Park Sun Hyun, Chun earned her second Major title following the 2015 US Women’s Open. She had previously won nine times of the Korean LPGA and twice on the LPGA of Japan tour.

The 22-year-old from Seoul said: “I just cannot believe I won the Evian Championship.  I had a really great time this week. Most people say golf is an individual sport, but I believe it is a team sport. My manager, my caddie, my coach and I as a team, prepared for this game and played this game. I love my team.”

Starting the final round in heavy rain, Chun began four strokes clear of Park and stretched that to six shots after birdies on the par-4 third and par-3 eighth holes. After turning in 33 with a five stroke cushion, she made four straight pars and bogeyed the short 14th before recovering with a tap-in birdie on the long 15th. Three pars to finish were enough to establish a new record, but it wasn’t easy. Chun hit her tee shot left off the 18th tee into thick rough and after taking out a wood, her caddie David Jones persuaded her to lay up with a wedge to avoid the water. She hit her third shot from 95 yards to around 10 feet from the hole and rolled it in for par, before raising her hands into the air.

Ricoh Women’s British Open champion Ariya Jutanugarn tied for ninth, enabling Lydia Ko to claim the Rolex Annika Major award as the most consistent performer across the five women’s majors in 2016. Ko signed off with a 73 to share 43rd position.

England’s Jodi Ewart Shadoff was the top ranked European player in a tie for 12th position on five-under, with last year’s Ladies European Tour Rookie of the Year Emily Kristine Pedersen of Denmark tied for 14th, which was her best finish in a Major.