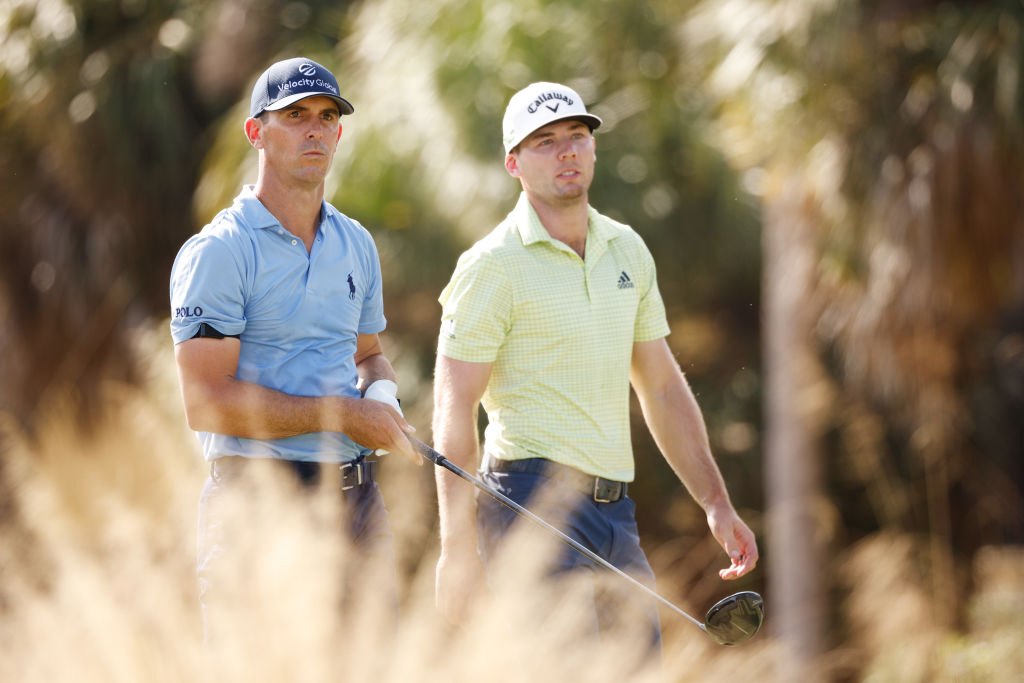 NAPLES, FLORIDA - DECEMBER 10: Billy Horschel of the United States and Sam Burns of the United States look on from the third tee during the first round of the QBE Shootout at Tiburon Golf Club on December 10, 2021 in Naples, Florida. (Photo by Cliff Hawkins/Getty Images)

As the PGA Tour comes to a close in 2021, attention now turns to the QBE Shootout in Naples, Florida.

The unique event pits pairs of golfers against each other and the change in format often brings its fair share of thrills and spills.

With a prize fund of 3.4 million pounds, the stakes in Florida are sky high and having been on  the tour for over 30 years, it has become somewhat of a staple in the latter stages of the season.

Previous winners of the event include Dustin Johnson, Ian Poulter, Greg Norman, and Fred Couples – testimony to the prestige the event is held in amongst the players.

And with 24 different teams taking part, it promises to be an incredible 4 days of golf at Tiburon Golf Club and here are some of the top QBE Shootout Betting Tips and offers:

Some of the biggest names in the world of golf are teaming up in Florida at the QBE Shootout.

American duo Sam Burns, and Billy Horschel start the event as favourites, with Burns in particular one of the form men on the PGA Tour right now and their games should dovetail nicely here in Florida.

Consistency is often key in pairs events and Jason Kokrak and Kevin Na are two of the cleanest ball strikers around, making them genuine candidates here in Florida.

Harris English has enjoyed by far his best season on the PGA Tour and took part in the victorious American Ryder Cup team and he should team up well with Matt Kuchar, a match play specialist and three time winner of this event.

Max Homa and Kevin Kisner could sneak under the radar here in Naples, but they are two men that know this course well and their playing styles should certainly complement each other.

Australian duo Jason Day and Mark Leishman are both very capable of tearing up any course they play and whilst neither man has been in the best of form in 2021, they are very much a team to keep an eye on here at the QBE Shootout.

With so many quality pairings assembled here in the Florida sunshine, getting into the winning enclosure could be tough but there are plenty of candidates to finish in the top 5 come Sunday afternoon.

English duo Ian Poulter and Lee Westwood are a dynamic and experienced duo that live for matchplay golf and should the conditions suit, they could be well in the mix on Sunday.

Canadian Corey Connors and Northern Irishman Graham McDowell are one of the most interesting matchups in the field and if their combination works well, they could sneak under the radar somewhat.

Danny Lee and Brandt Snedeker are another fascinating team taking part in the QBE Shootout and with both men in decent form, they could be very much in the running come round 4 in Florida.