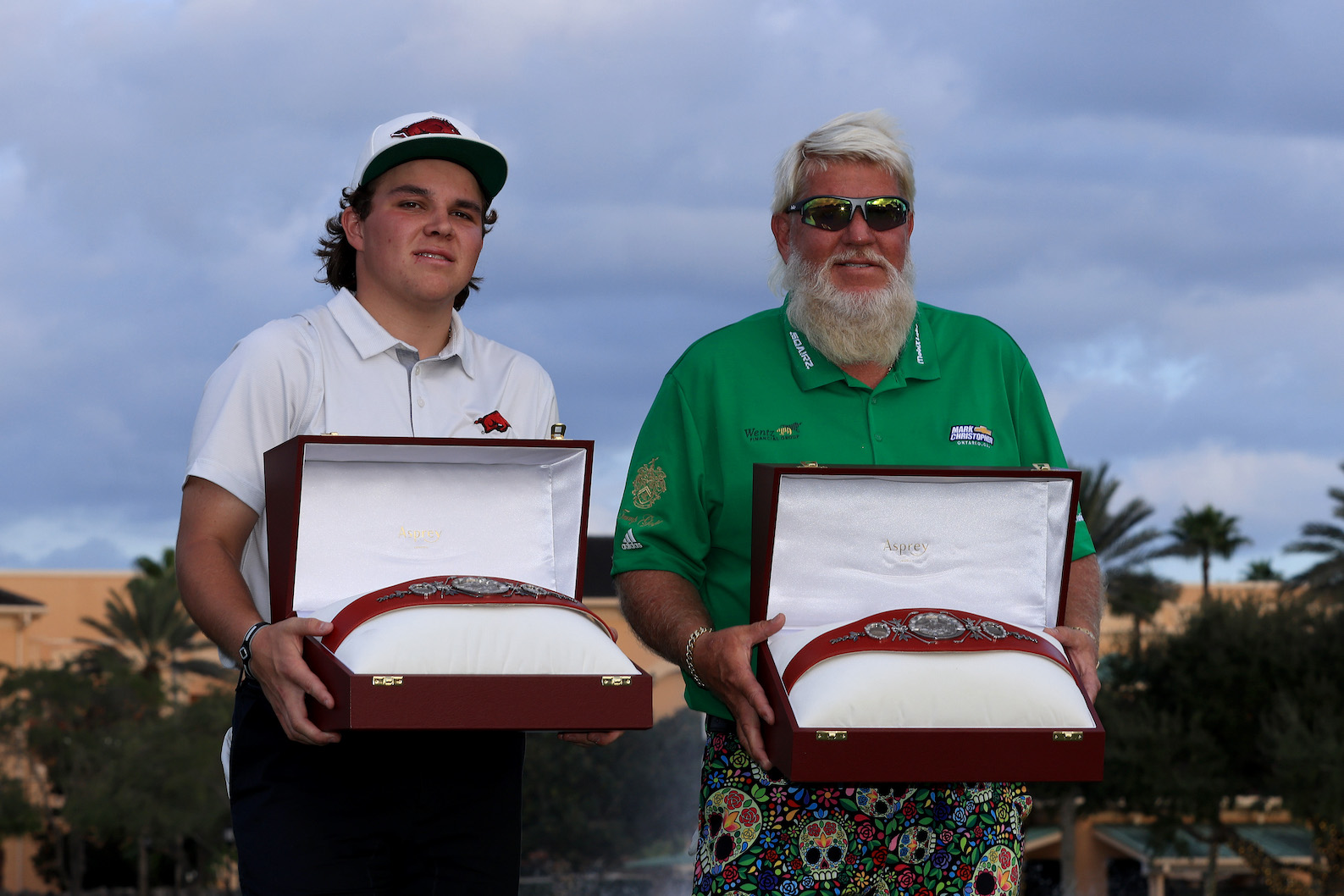 ORLANDO, FLORIDA - DECEMBER 19: John Daly II (L) and John Daly poses with the trophies following the final round of the PNC Championship at the Ritz Carlton Golf Club Grande Lakes on December 19, 2021 in Orlando, Florida. (Photo by Sam Greenwood/Getty Images)

Tiger Woods narrowly missed out on victory on his return to competitive golf after coming second at the PNC Championship tournament in Florida.

Woods, partnered by his 12-year-old son Charlie at the family-focused event, reeled off 11 consecutive birdies to finish on 25 under – two shots off winners John Daly and his son, who is also called John.

Woods was playing in his first event since suffering career-threatening injuries in a car crash 10 months ago.

“I’m just happy and thankful that I’m able to do this,” he said. “I still have my own leg, which was questionable for a while, and it’s functioning. I’m just really tired – I’m not used to this.  I think this might be only my fourth or fifth round of golf this year. I’m a little worn out. It was nice to have a cart.”

Team Woods carded a 15-under-par 57 in their second and final round at the Ritz Carlton Golf Course in Orlando. Woods said he and his son had set a pre-tournament target of playing two bogey-free rounds which they had achieved.

“We got on a run, which was great. Charlie was hitting the ball unbelievably well and made a few putts. It got interesting and a little tight toward the end, which was fun,” he said.

Daly, 55, playing with his son John Daly II, closed with a birdie to finish on 27 under par.  The 36-hole total of 117 broke the previous tournament scoring record set by Davis Love III and Dru Love in 2018 by one stroke, and earned Team Daly the red-leather Willie Park winner’s belts.

John II is currently in his first year of a golf scholarship at the University of Arkansas, his father’s alma mater. The 18-year-old has been playing in the PNC Championship since he was 12.

“To watch him grow up to do the things he can do with a golf ball makes me very proud,” said Daly. “He played phenomenal, and got us out of trouble when my putter was off, although I helped him with a few shots here and there!”