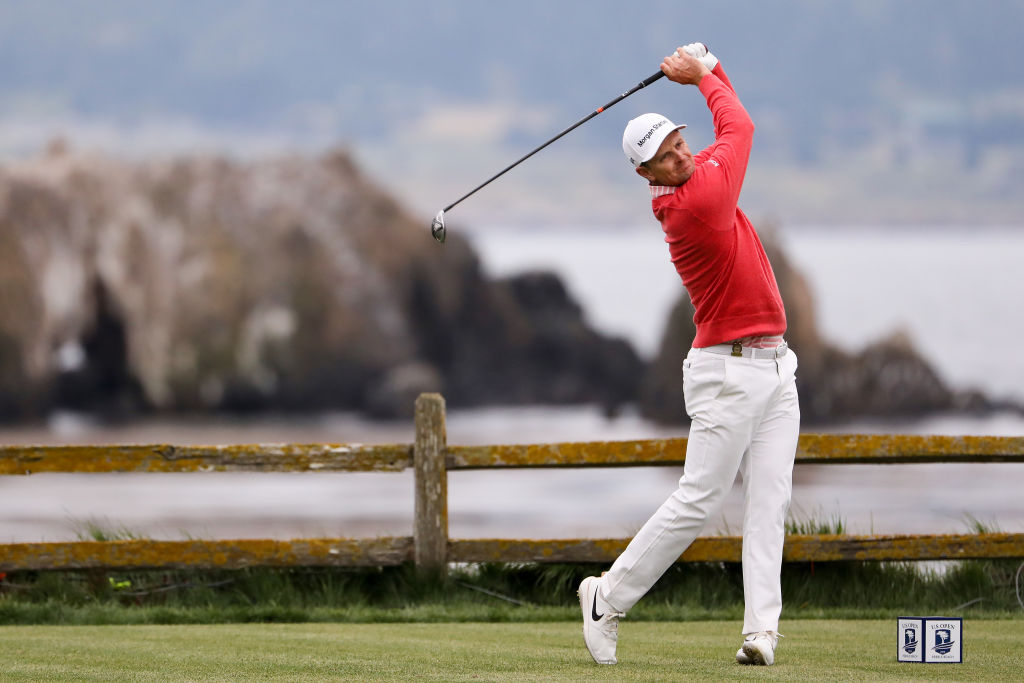 PEBBLE BEACH, CALIFORNIA - JUNE 13: Justin Rose of England plays a shot from the 18th tee during the first round of the 2019 U.S. Open at Pebble Beach Golf Links on June 13, 2019 in Pebble Beach, California. (Photo by Christian Petersen/Getty Images)

Justin Rose began his quest for a second US Open title with a record-equalling six-under-par 65 at Pebble Beach.

The Englishman’s score matched that achieved by his Thursday playing partner Tiger Woods on his first round at the California links in 2000, when Woods went on to win by 12 shots.

Rose looked likely to finish inside the top ten on the leaderboard at best when he reached the 16thhole on three under par, but a stunning birdie, birdie, birdie finish saw him leapfrog a quartet of players on under five under to take the lead after an usually low-scoring opening day of the season’s third major.

Although slightly off target with his irons, Rose got hot with his putter, holing out 15 times from inside ten feet to set himself up for his record-equalling round.

“I don’t know if I did a great job of anything today other than scrambling,” said Rose, who failed to qualify for the two previous Pebble Beach US Opens in 2002 and 2010. “But it’s nice to know that I can play like that a still shoot a decent score. I know there’s more in the tank.”

Rose’s three-hole flourish saw him finish one shot ahead of Rickie Fowler, Xander Schauffele, Louis Oosthuizen, and Aaron Wise. Rory McIlroy put pressure on himself to get a fast start, and he came away satisfied after an opening 68, which puts him three behind his Ryder Cup teammate, and tied with a host of players, including Henrik Stenson and Francesco Molinari.

Brooks Koepka, seeking his third consecutive US Open win, looked to be picking up where he left off after getting to four under par after just six holes, but he dropped shots at 8, 14 and 17 en route to an opening 69, which leaves him nicely poised at just four shots off the pace.

Woods, playing alongside Rose and Jordan Spieth in the day’s marquee group, was two under par after reeling off three birdies in the opening seven holes, but was only able to par every hole from the eighth to the 18then route to an opening one-par par 70. Spieth

On a benign day, with little in the way of wind, a total of 57 players scored par or better. The 72.66 stroke average was the lowest for a first round of any of the six US Opens cheld at Pebble Beach, nearly two strokes lower than the 74.51 recorded in 1992.