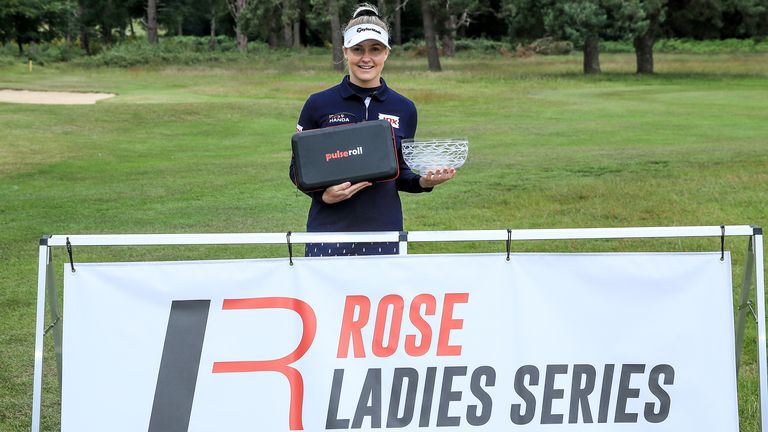 Played in wet conditions, Brokenhurst Manor proved a tough opening venue as nobody in the field managed to break par, with Hull and Young, finishing tied at the top after both carded level-par 70s. Young, who is attached to Brokenhurst Manor, came up with the idea for the series.

However, Hull, who was the highest ranked player in the 47-strong field, appeared to be cruising to victory in regulation as she was two under with two holes to play, but her unfamiliarity with the course proved costly on 17 as she blocked her tee shot too far right, found a ditch and ran up a double-bogey.

Hull regrouped to par the last, and the top two then split the fairway with their drives on the first play-off hole, but Young misjudged her wedge approach and finished 30 feet from the pin, with Hull facing around half that distance for her birdie. Young putted up to six feet and was lining up a tricky putt for par, but Hull saved her the trouble as she rattled her 15-footer into the centre of the cup to claim victory and the £5,000 first prize.

Gabriella Crowley finished one stroke shy of the play-off with a 71, with Hannah Burke on her own at two over and Alice Hewson, a winner on the Ladies European Tour in South Africa in March, firing a 73 alongside Holly Calvert.

Justin and Kate Rose put up £35,000 in sponsorship money to support the event, a figure that was matched by American Golf.

“I’m just so happy to be playing professional golf again and have a scorecard in my hand,” said Hull, whose last competitive round of golf was five months ago at the Gainbridge LPGA in Florida. “The golf course was in great condition and it was my first time round here today. I was quite happy with my score. I doubled the 17th, because I took a wrong line off the tee, but it was just great to be playing. I’ve missed it loads. I love playing golf. I’m pretty much golfed out because I’ve been playing every day, but I can’t wait to get back out on tour.”

She added: “I want to thank Justin and Kate Rose for putting these events on. You need to be playing to get back in the mindset. I’ve been playing a lot for the last few weeks and I played eight days on the trot, but it’s not the same as having a scorecard in your hand.”

The next event is at Moor Park on June 25, while it has just been announced that the Grand Final will take place at The Berkshire and Wentworth on August 6-7.