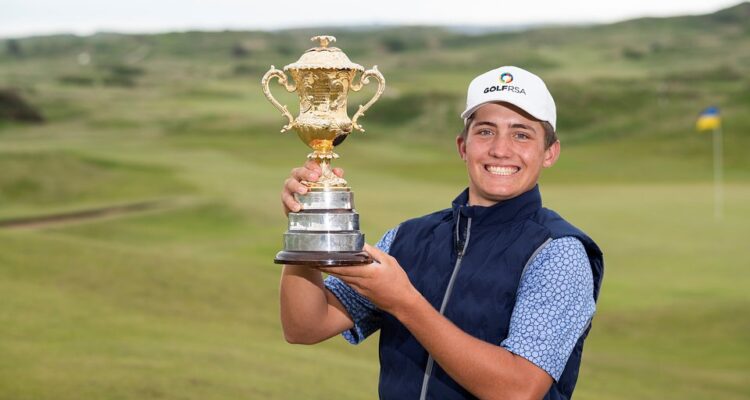 Christiaan Maas won the Brabazon by five shots at Saunton

South Africa’s Christiaan Maas conquered a golf course he once thought was ‘impossible’ to win the Brabazon Trophy by five shots from Essex’s Arron Edwards-Hill.

When the 18-year-old first clapped eyes on Saunton Golf Club and played a practice round in driving rain and howling wind, he thought he’d struggle to make an impact in his first major event on English soil.

Fast forward four days and after racking up 25 birdies in 72 holes, the young golfer from Pretoria was crowned the English Men’s Open Amateur Stroke Play champion.

The teenager started the day one shot ahead of Edwards-Hill and three clear of defending champion Sam Bairstow in his pursuit of the famous Brabazon Trophy.

However, it soon became clear that the pressure of leading going into the final round was not going to weigh down the teenager. In fact, he seemed to thrive on it.

In the end, Maas carded a final round 68 to go with previous scores of 65, 70 and 67 for a total of 270 (-14) and a five-shot victory over Edwards-Hill, with Ireland’s Matt McClean in third spot a further shot back after closing with a three-under par round of 68.

Defending champion Bairstow – hoping for a final day charge – had to settle for fourth place after shooting a two-over par round of 73.

Clutching the famous gold trophy and draped in the South African flag, Maas said: “I’m proud to win this tournament – a big one and I don’t really know what to say. I’m just glad I pulled it off. The first practice round on this golf course – well, it seemed impossible with all the wind and the rain. The weather was then perfect for me all week so I got lucky on that. It has to be the best golf, ball-striking wise, I’ve ever played. Off the tee this is the first tournament that I haven’t lost a golf ball!”

For Edwards-Hill from Chelmsford, it was a disappointing day resulting in a round of 73. The England men’s squad member said: “I struggled on the firmer greens with distance control and my pace putting wasn’t getting the ball close enough. You can’t leave it six feet every time as you’ll miss eventually. It was a shame not to get the win, but I’ll move on and take this week’s performances into the next few months. I think a win is coming and I look forward to the season.”