Leeds Castle Golf Course might not be in the city of Leeds – in fact, it’s in a small village in Kent – but it most definitely has a castle, and one that provides a stunning backdrop to arguably one of the prettiest 9-hole public golf courses in the South East.

The par 34 course, which is located five miles from Maidstone, first opened in 1924 and was built for the Honorable Lady Baillie, the then owner of Leeds Castle. The castle and the golf course was opened up to the public in 1976, and since then has been enjoyed by generations of golfers from all over the country. 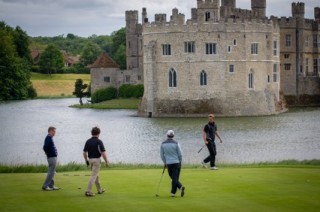 Known as ‘the loveliest castle in the world’, parts of the historic building date back to the 12th century, while its stunning moat, turrets and castellations are all in superb condition, making it a major attraction for visitors to this beautiful corner of Kent.

As well as popular tourist venue in its own right, the castle has hosted all manner of public and private events, including meetings for foreign heads of state, business conferences, open air concerts, and even served as a dramatic location for the BBC’s Antiques Roadshow. It is also a romantic venue for weddings, and famously hosted the nuptials of former US Open champion Retief Goosen. The grounds are also home to a maze, and what maybe the only museum in the world devoted to dog collars.

“We have something very special here, and there’s nothing like it in the world,” says Steve Purves, the golf club’s long-standing professional, who has been in the role for 18 years. “I feel very privileged to work at such a wonderful place, and hope to continue for as long as they’ll have me!” 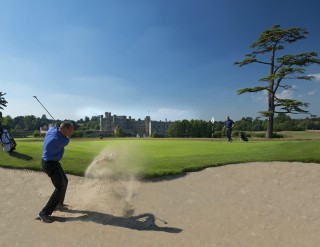 Purves, who still competes in tournaments on the PGA South Region and Kent PGA circuits, enjoys giving lessons to golfers of all standards in this most inspiring of settings. Golf lessons are available for groups or individuals, with prices starting from £22.50 for a 30-minute private lesson to £60 for a nine-hole playing lesson, while a series of four half-hour lessons costs just £40.

The course itself has changed little over the years, although former Ryder Cup player Neil Coles was brought in to make some revisions to the layout in the late 1980s. The re-routed course now has a new 6th hole along the moat’s edge, and a teasing par three 8th hole, plus the 9th hole has been extended to a par four.

At just £13 for nine holes during the week, and £16 at weekends, it’s an extremely affordable and entertaining round of golf, and being just 2,843 yards long, gives golfers plenty of time for a pleasant stroll inside the castle once they’ve negotiated their way around the course.

Visiting golfers can simply turn up and play on the day, or pre-book up to six days in advance. But even better value Is offered through an annual season ticket, which represents great value at just £295 for an adult five-day ticket, and £395 for a full seven-day ticket. To make it even more affordable, payment can be spread across the year.

For those who play less frequently, the club’s new One Under Card allows you to buy seven rounds for the price of six. Also available in midweek and seven-day formats, prices start at £78 for an adult five-day card.

Both have great benefits and are available to purchase online at www.leedscastlegolf.com, directly from the pro shop, or by calling 01622 767828.

EXCLUSIVE GOLFNEWS READER OFFER
Buy any golf season ticket online and receive a FREE 12 pack of Titleist Velocity golf balls worth £30! To take advantage of this offer, which is valid until March 31st 2016, visit www.leedscastlegolf.com and quote promotion code ‘GNM2’.