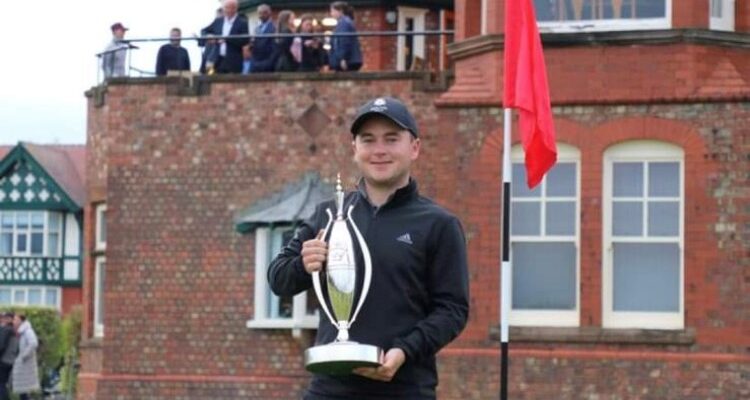 Buckinghamshire’s John Gough’s continued his stunning run of victories in top amateur events with a dramatic triumph in the Lytham Trophy.

The 23-year-old England men’s squad player took the prestigious title by a single shot from 15-year-old Scot Connor Graham after closing the 72-hole stroke play event with a round of 70 for a winning total of level par. Kent’s Ben Quinney third with a closing total of +3.

For Gough, the latest piece of silverware will sit alongside the English Men’s Amateur trophy he won last year at Moortown Golf Club and the prize from the Spanish Amateur Championship following victory in that event in March.

Gough took the plaudits at the 56th staging of the event at Royal Lytham & St Anne’s Golf Club with an excellent display on one of the country’s toughest links venues to edge out Graham, who belied his years to put up a strong fight for the title.

Rounds of 67, 70 and 73 around the par-70 Open Championship course meant Gough was tied for the lead with Ireland’s Eoin Morgan heading into the final 18. He soon edged ahead of his rivals with birdies at the second, seventh, ninth and 12th holes. There then followed a wobble on the back nine with three consecutive bogeys from the 14th, leaving him tied with Graham who had posted the clubhouse lead on +1.

However, a birdie on 17 pushed Gough ahead once more and a par at the Lancashire course’s famous finishing hole allowed the BB&O player to claim one of the biggest prizes in amateur golf.

In an international field, Gough becomes the fifth English winner of the Lytham Trophy in succession following in the footsteps of Josh McMahon, Matthew Jordan, Jack Singh Brar and Alfie Plant.