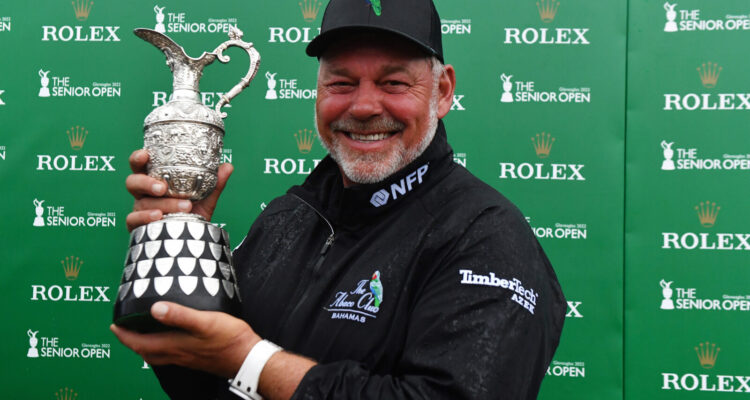 Double Jugs: Darren Clarke is one of only four players to have won both the The Open Championship and the Senior Open

Darren Clarke secured victory at Gleneagles to join an illustrious list of names to win both The Open Championship and The Senior Open.

The Northern Irishman left it late as he birdied the last for a one-under-par 69 to win on ten under par, one stroke clear of Pádraig Harrington, after heavy rain had caused a two-hour delay with Clarke still having five holes to play.

The 53-year-old becomes the fourth man to win both The Open and The Senior Open, placing his name alongside greats of the game Bob Charles, Gary Player and Tom Watson, and he led from the front despite the weather attempting to hamper his progress.

The 2011 Open Champion carded nine consecutive pars before dropping his only shot of the day at the par-five tenth, however he bounced back with a birdie at the 12th to remain the man to catch.

The pars continued to roll either side of the rain delay, before his approach into the par-five 18th came up just short of the green, leaving him with an 80-foot up-and-down for victory. The 14-time DP World Tour winner opted for the putter and rolled an excellent effort to two feet, enabling him to tap in for a memorable victory.

Harrington’s closing 67 was enough to secure his third runner-up finish in Senior Major Championships of the season, in addition to his US Senior Open triumph, while six players shared third place on eight under par, including third round co-leader Paul Broadhurst and four-time Major winner Ernie Els.

Clarke said: “I’ve made no secret of the fact that I wanted to win the Senior Open more than anything. From when I turned 50, this is the one I wanted to win, so I could set it beside the other one, so I’m feeling pretty good right now. I feel very privileged to have my name on two such prestigious trophies and feel honoured and humbled to join some legends of the game who have achieved the double. Not that many people have done it before.”

He added: “This trophy doesn’t hold as much the one I won at The Open, but I’ll have a few celebratory drinks from it tonight. Fulfilling your dreams is a very lucky thing, and I’ve been able to do it a few times in my career.”