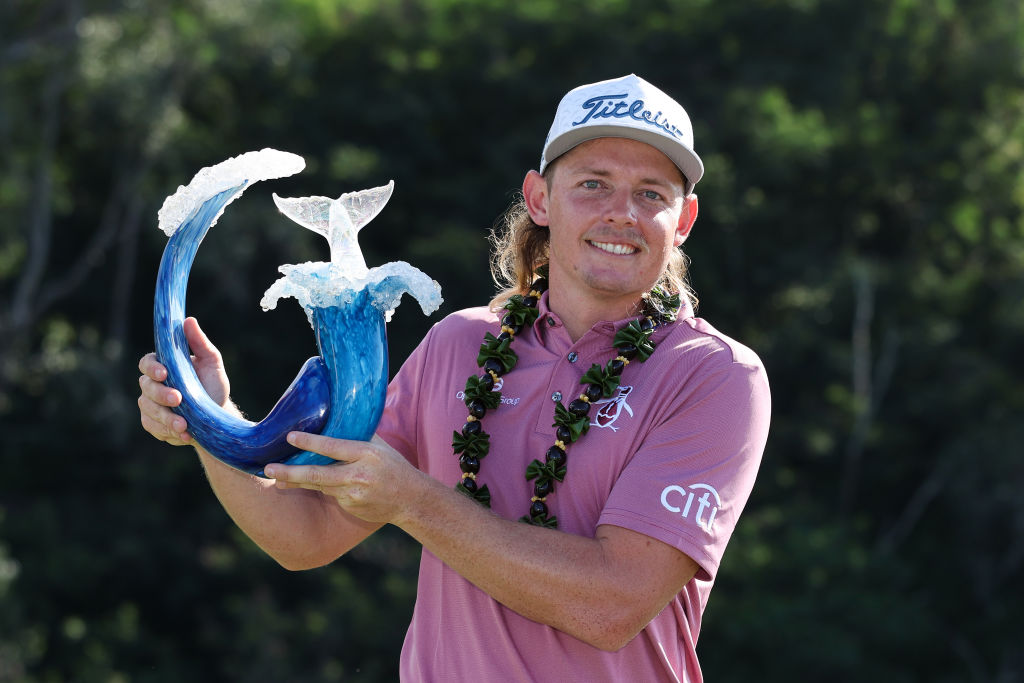 LAHAINA, HAWAII - JANUARY 09: Cameron Smith of Australia celebrates with the trophy after winning during the final round of the Sentry Tournament of Champions at the Plantation Course at Kapalua Golf Club on January 09, 2022 in Lahaina, Hawaii. (Photo by Gregory Shamus/Getty Images)

The 28-year-old from Queensland beat world No.1 Jon Rahm by a single shot following a thrilling Sunday afternoon’s play over the Plantation Course at Kapalua.

The invitation-only 38 player field made lightwork of the par-73 course throughout the week, with Smith finishing at a staggering winning score of 34 under par to claim a fourth career PGA Tour title.

Rahm finished a shot back, while another Australian, Matt Jones, stormed into third with a final round 61 that featured two eagles. Jones shot a third round 62 to be 23 under par for the weekend’s play, and a 32-under in total.

Smith, Rahm and Jones all beat the old PGA 72-hole record low score in relation to par in a 72-hole event, the 31-under Ernie Els at Kapalua in the 2003 Tournament of Champions.

Smith’s victory, which earned him $1.4m, is his second individual PGA Tour title having won the 2020 Sony Open, also in Hawaii. He’s also twice won the Zurich Classic pairs event, alongside Jonas Blixt and Marc Leishman in 2017 and 2021 respectively.

“It was intense,” Smith said of the final round showdown after he and Rahm started the day level. “Jon and I both played well all day, and we had Matt [Jones] in the group in front lighting it up. It was an unreal round and something I’ll never forget.

“I was trying to get it to 35 under. We missed it by one, but I’ll take the win. My game is in great shape. I feel like I had a really good rest over the Christmas break, and I didn’t play much in the autumn, but I put some work on my swing and I mmanged to bring it to the course.”

Rahm was stunned after the round that he wasn’t celebrating a victory. “It feels really strange to shoot seven-under and almost be complaining because it should have been a lot lower,” Rahm said. “I’ve every reason to be smiling but one. It’s a weird feeling. I played great golf, I shot a low score, 33-under, and I still lost by one.”

Further down the leaderboard, Patrick Cantlay finished fourth on 26 under, and Collin Morikawa, Justin Thomas and Daniel Berger a shot back in tied fifth.

For the final leaderboard from the Tournament of Champions, click here.