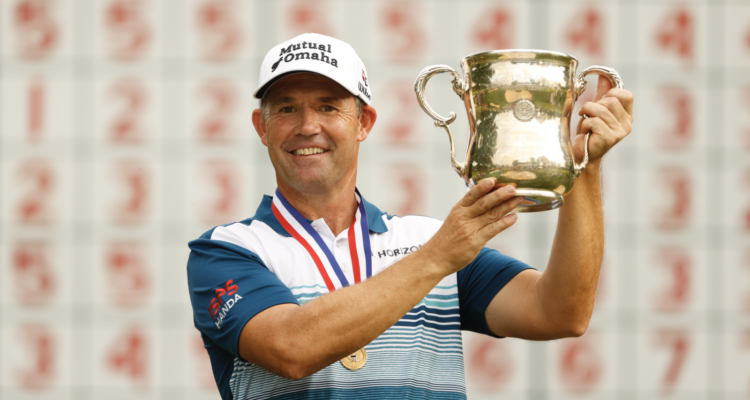 27 June 2022
Padraig Harrington has won the US Senior Open after holding off a final-round charge from American Steve Stricker at Saucon Valley Country Club in Pennsylvania.
Harrington, who began the day with a five-stroke cushion, had to dig deep on Sunday to close out a one-stroke victory over Stricker to win his first senior major and his first win on the senior circuit since turning 50 last August.The Dubliner carded a 1-over-par 72 for a 10-under total to become the first player from the Republic of Ireland to hoist the Francis D. Ouimet Memorial Trophy. He also joined Arnold Palmer, Gary Player, Lee Trevino and Jack Nicklaus as the only multiple winners of The Open Championship to also win the US Senior Open.Harrington laid the foundations for his victory with rounds of 71, 65, and 66 to give himself a five-shot lead with 18 holes to play, but dropped shots at 1, 7, 10 and 11 in the final round opened the door to Stricker, who covered his last 11 holes in six-under par for a closing 65. However, a 30-foot birdie putt on the par-4 15th hole settled Harrington’s nerves, and he was able to close with three two-putt pars to claim the historic win.
“I think it’s special for me to win this one just because I’ve never won a USGA event,” said Harrington, who finished second to Stricker in the season’s first senior major, the Regions Tradition, in May. “I think that adds more than if you could turn around and win a different senior major. But because I was never a US Open champion or a junior champion, it’s great to come and win the senior one. It adds something that I never had in my career.”
Stricker, who captained the USA side to victory over the European side led by Harrington in last September’s Ryder Cup, said: “Hats off to Padraig. He played great. It was close, but he was the better player this week. I came out with a goal of shooting 6 or 7 under today, and I ended up shooting the 6. Yesterday’s 73 really put me behind the 8-ball, but I’m happy about the way I played today.”
For the final leaderboard from the 2022 US Senior Open, click here.