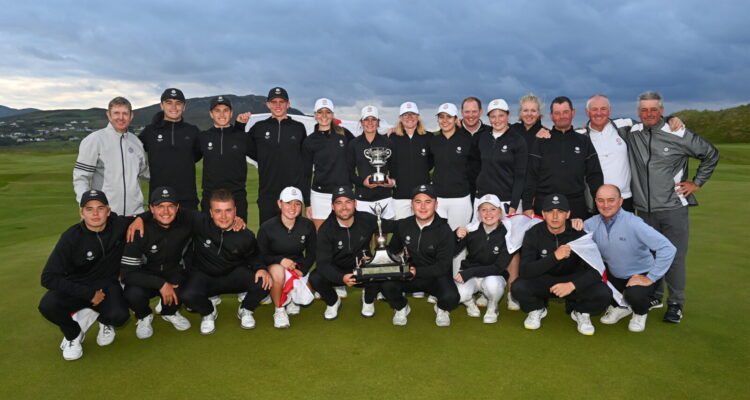 A determined singles performance from England saw them edge out Ireland to top the standings in the first-ever combined team format for men and women in the R&A Home Internationals at Ballyliffin Golf Club in Ireland.

England captain Becca Hembrough was understandably delighted with the performance, hailing the resolve of her charges who lost none of the six matches that went the distance. She said: “An incredible performance, especially from those early matches. Early on in the singles it didn’t look so good. but they just kept fighting and to turn a couple of those matches into halves and a couple into wins – it was just amazing. They dug deep and they kept hitting quality golf shots. It was a tough finish, with some tough pin positions over the last few holes. I am incredibly proud of them.”

Ireland began the day in pole position, knowing a win or even a draw would see them secure the title, but England was never going to go down without a fight.

Hembrough added: “This group of players did not need any motivational words after this morning. They wanted to win. That is what they want to do when they play for England. They were fired up, no words were needed. To be trailing going into the singles was all that was needed really. If you look to the lads who went out first, Sam Bairstow and Aaron Edwards Hill. To do what they did in the foursomes (they won 3&2) and then go out in those first singles matches and just fight right to the end (they both halved their matches) that was a standout today.”

Hembrough also backed the format change, seeing it as a significant development. She added; “From my perspective, it was fantastic for the women to share the same stage as the men. That has been a huge positive to come from this event. Yes it’s new, yes there have been some logistical challenges, but that aside I can only see this as positive. They are all quality golfers. They are the best in the countries. It has been great to see them mix and compete together in a team environment.”

“It was heartbreaking to miss out on the combined because we really came together as one team this week. It’s hard to miss out by such a small margin,” said Ireland captain Naoimh Quigg on losing by just one point. “It has been an amazing few days. I’m delighted to see the girls win that title. This group has come through the ranks together from junior into senior and have worked very hard so I am pleased to see them get that reward.”

In the day’s other match Wales edged out Scotland 11-10, a result which saw them finish third in the combined standings with Scotland ending the event without a victory.

For all the scores from the 2022 Home Internationals at Ballyliffin, click here.