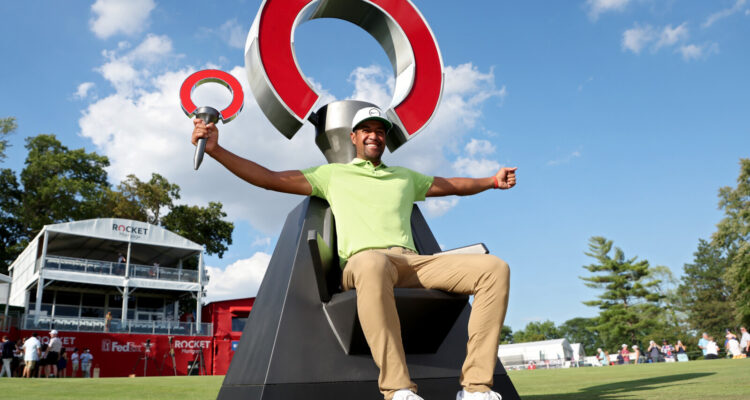 Tony Finau claimed a second PGA Tour title in as many starts by cruising to a five-stroke victory at the Rocket Mortgage Classic in Detroit.

The 32-year-old mixed six birdies with a lone bogey on his way to a five-under 67 at Detroit Golf Club, seeing him end the week on 26 under and become the first player since Brendon Todd in 2019 to win PGA Tour events on successive weeks.

“One of my goals would be to be a multiple winner on Tour this season – to be able to accomplish that is amazing,” said Finau, who moves to seventh in the FedExCup standings with the victory. “Another goal is to win the FedExCup and I put myself in position to do that.

“Scottie (Scheffler) is going to be extremely hard to catch. Sam Burns, those guys have had unbelievable seasons. I think Cameron Smith is up there. Those guys will be hard to catch, but the way the points work in the FedExCup, you’re able to race up that, climb that ladder pretty fast. I at least have given myself a chance to do that.”

Finau took advantage of the par-fives on the front nine, birdieing both the fourth and the seventh, before following a 12-foot par-save at the ninth by rolling in a 20-footer to pick up a shot at the next.

A long-range three-putt bogey at the 11th was cancelled out by Finau holing from 30 feet at the next, with the American then making two-putt birdies at the 14th and 17th to complete a convincing victory.

Cantlay charged up the leaderboard on the final day with four birdies in the first five holes helping him to a second successive 66, despite bogeying the last having made a brilliant eagle at the par-five 14th.

Young also ended on 21 under after four birdies in the last six holes helped him a final-round 68, while Pendrith lost his overnight lead with a bogey on the second hole and slipped out of contention on the back nine.

England’s Matt Wallace moved inside the top 125 on the FedExCup standings with a top-10 finish ahead of this week’s Wyndham Championship – the final regular season event and last chance to qualify for the FedExCup Playoffs.