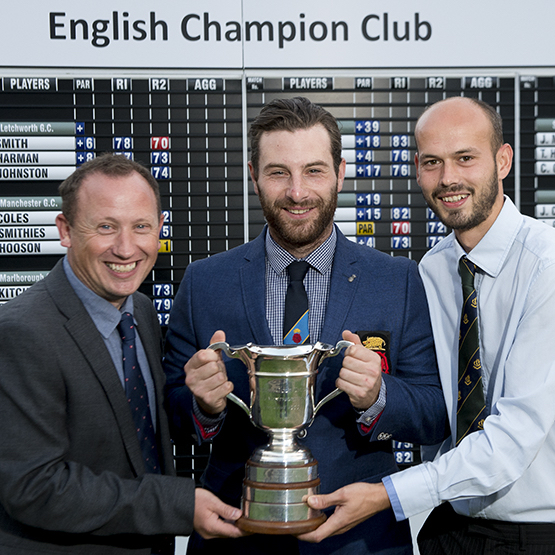 The three-man team from Hayling Golf Club in Hampshire staged a tremendous late charge to win the English Champion Club title by two shots at Stoke by Nayland Golf Club on the Suffolk/Essex border.

After Saturday’s first round on the Gainsborough course, Toby Burden, Richard Harris and Kevin Hickman were 19-over par, in 16th place and 14 shots behind the halfway leaders, Woburn.

On Sunday, they were still 19-over par after completing 27 holes, but they zipped through the final nine in a team total of eight-under par and rocketed to the top of the leaderboard. Burden and Hickman both went round in four-under 67, while Harris added level par 71 for a total of 11-over par.

They finished two clear of Worksop and Woburn, which tied on 13-over par. The teams from Spalding and Henbury were a further shot back in fourth.

This was Hayling’s first victory in this prestigious championship, and now the team will represent England in the European Men’s Club Trophy at Aroeira Golf Club, Portugal, from 20-22 October.

Harris remarked: “Everyone at the club is really happy and excited. For me I’m still asking if it’s really happened because we were so far behind after the first round – and now we’ll be representing England.”

Hayling is a links course and, with Friday’s practice round washed out by heavy rain, Harris admitted that he had initially struggled to adapt to the hilly, tree-lined course where water is a feature.

“But I got used to it and went at everything in the final rounds as we had nothing to lose,” he said. “When we started playing we were just going to shoot the score and see what happened. But the pressure starts to build when you know you are in contention.”

Hickman completed the fightback with his bogey-free 67. “I didn’t really know what my team-mates were doing, I just focused on my own game and did what I could to see if we could come first. I played solid and didn’t make any mistakes.”

He was level par to the turn before playing the back nine in four-under with a birdie on the 11th and three in a row from the 13th.  “We needed something!” said Hickman, who has been a Hayling member for only 18 months.

Spalding’s Simon Richardson topped the individual table on six under par after rounds of 70 and 66. “It’s disappointing the team has come up a bit short, but from a personal point of view it’s nice to shoot the scores.” He finished the event three clear of Hayling’s Hickman and four ahead of Henbury’s Nick Day.